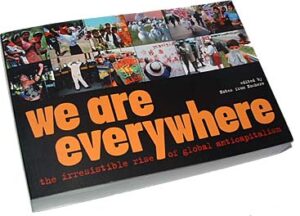 Katharine Ainger – is a writer, activist and co-editor of New Internationalist magazine. He believed that gouging all the countless stories in the world could change him. Half British and half Indian, he grew up one Asia and Europe, and for about years he regularly returns to work and learns from Asian social movements. He has recorded for all manner of outlets from serious broadsheets, to disreputable radical publications. He currently resides on an island in the middle of the Thames.

Graeme Chesters – is an author and educator based at Edge Hill College in north-west England. He is a co-founder of the Shifting Ground cooperative and is involved in a number of activist and academic networks, some of which are surprising and sometimes overlapping. Currently analyzing and taking notes on issues as diverse as global complexity, civil society and participatory democracy, the biggest obstacle is finding techniques to juggle parents with activities that are done and still remain on the streets. He continues to be inspired by everyday acts of solidarity and defiance that sometimes go unnoticed in the midst of more spectacular moments of contention, even though he feels participating in both. He lives on the threshold of the Lake District with Gwyneth and their two children Dylan and Joel.

Tony Credland – is a London-based activist and designer who is involved with Reclaim the Streets, Indymedia and Cactus Network.

John Jordan – is an artist and activist who spends his time trying to find a space where the imagination of art and socio-political engagement can be brought together. For 10 years he was the co-director of Platform, an arts and social sciences group, and also worked on a social arts project on men and pornography. Since 1994 he has worked in the live action movement, in particular with Reclaim the Streets (1995-2001). He has recorded and lectured extensively on the anticapitalist movement and is a senior lecturer in fine arts at Sheffield Hallam University (1994-2003). He lives in London and mixes his time between trying creatively to overthrow capitalism and raising his son, Jack. He recently fell in love with popular opposition in Argentina and got involved in various projects to spread the word and inspiration of the events taking place there.

Andrew Stern – is an activist and documentary photographer who has been involved in the anticapitalist movement in various  capacities since a colleague dragged him to his first anarchist gathering a few years ago. He can be found working on various photography projects in different parts of the world, including helping organize a caravan of Indymedia activists to undertake trips throughout South America in the wake of the economic collapse and popular opposition in Argentina. He’s just as comfortable on the front lines of action with camera in hand or not, and many times will leave his camera at his residence to play with creative live action formats on the streets. Like the rest of the collective, the fusion of art and politics is the main goal in whatever he does, along with collecting and sharing stories that are often left untold. His work has been shown in galleries around the world and can be found on the various  Indymedia websites as well as in the numerous  publications he has worked on.

Jennifer Whitney – is currently plunging into a number of balancing acts – calming her desire to bring thousands of people together on the streets to inspire mass action with her commitment to long-term struggles of local and everyday variety; combining her creativity and imagination through writing, dancing and music with her more technical and not quite sexy skills; and fill her passion for travel, languages, sharing skills and cross-cultural adventures, as well as her love for gardening, building communities, and other things that require deep roots. He is a health care worker, and organizes clinics and street medical teams for direct action. While he’s atlive in the Pacific Northwest, he can be found working with the Black Cross Health Collective in Portland, or playing drums with the Infernal Noise Brigade. He draws much inspiration from Latin America, where opposition has penetrated many corners of society and erupts into the streets with increasing frequency, and he aspires to continue to spread the stories of those who compose history.